I first met Theo in an IKEA store. Not so strange, you might think.  But, you see, Theo was living in a box of shoehorns at the time.  Yes, shoehorns. Now, you might think THAT is strange but it isn’t really, for Theo is a shoehorn himself! A very special shoehorn who became a fellow traveller and mascot. It all came about like this.

There we were… oh, didn’t I mention the others? Shame on me! After all, they’re in the story too.

There we were, the KNOTbound Roadshow Crew –  Ajax, Tia and I –  trundling through IKEA, looking for some bags to pack things in when, out of the corner of my eye, I saw movement in a box of shoehorns. Now that seemed a bit odd so I decided to wander over for a closer look. I looked and I looked but nothing seemed out of the ordinary; just a box of overly long shoehorns, it seemed. But as I turned back toward my friends, behind me I heard a distinct rustling sound! Swinging around I caught sight of a shoehorn wriggling deeper into the box (which was VERY full of shoehorns!) and quick as a wink I grabbed that odd fellow. Oh, how he struggled! He kept trying to thwack me to make me let go but I, being adept at avoiding unwanted thwacks, kept my grip tight while calling my crewmates over.

When he realised it was useless to fight, well, that shoehorn became as still and quiet as you could please. In fact, he was so still and quiet that my crewmates were quite puzzled by my story and my insistence that we take him with us.  Ignoring the less-than-subtle looks Ajax and Tia gave each other, I confidently headed off to the checkout with my prize. I knew there had to be a story behind this strange and unusual shoehorn fellow and I was determined to find out what it was. 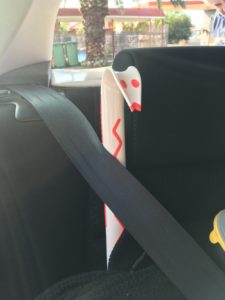 Theo in the car

Well, we strapped that shoehorn into the backseat next to Tia, who I was sure would give him a good grilling, and we rolled on back to the road, heading for Brisbane.  Why were we going to Brisbane, you ask? Well that’s another story in its own right and you will hear that tale elsewhere!

As I was saying, we got ourselves back on the road to Brisbane proper and, as soon as the car started down the road, Theo (as we soon learned he was named) turned to the window in excitement and scared poor Tia nearly out of her britches! Which would have been okay with Ajax and me but might have embarrassed the poor gal.

As I had figured, Tia soon got Theo talking and a sad story indeed emerged. It seems poor Theo was from a wild shoehorn family that lived close to a shoehorn factory deep in the Australian outback.  The reason it was so far from civilisation is that this shoehorn factory had got its start kidnapping the likes of Theo and his family many years earlier.  They now had a bunch of domestic shoehorns to make more shoehorns (we’re not going to go into the detail of shoehorn breeding habits: children might be reading this!) and the kidnappings had lessened although not altogether stopped. Still, it had been many years since the last time a shoehorn had been wrenched from its family and the local shoehorn families were feeling pretty safe.  It seems that the demand for shoehorns had dropped quite a bit in the world so the factory was able to keep up with demand through its in-house breeding program.

All this being the case, Theo’s family decided to have a picnic on the edge of the woods across the meadow from where the factory sat.  They had a good view of the factory and figured that they would see anyone coming at them from a fair way off.

Which would have been fine and dandy if Theo hadn’t decided (as youngsters are wont to do) to go exploring, as he hadn’t been in that part of the woods before.  His parents would have stopped him, of course, if he hadn’t chosen his timing just right, when they were all full of yummy picnic food and dozing contentedly in the sunshine leaking in under the trees.

Theo edged quietly deeper into the woods, making sure to be as quiet as only a shoehorn in the woods can be (not having any feet makes this easier).  As soon as he was far enough away, off he went, looking at all the new and wondrous things along his path.  Indeed, he was so engrossed in what he was seeing that he quickly lost track of the time or how far he had come.  More importantly, he hadn’t realised that, at this point, the woods began edging toward the factory, being so bold as to eventually come within feet of the factory door!

Theo in the woods

And that is when disaster struck.  Unfortunately for Theo (and the whole shoehorn family, of course), at that exact moment the factory supervisor wandered out of the door for a smoke.  His manager had just been having a go at him, as it seems that white shoehorns with red stripes were suddenly in demand and the factory had been breeding other types – especially as their last male white with red stripes shoehorn had recently been laid to rest and gone to shoehorn heaven.  It also just so happened that this was EXACTLY the type of shoehorn Theo was.  Being white and all, he of course stood out like a sore thumb in the green of the trees (in fact, a sore thumb probably would have been harder to see!)

As soon as that ole supervisor saw Theo, he knew that here was the answer to his problem.  Right in front of him was a prime white with red stripes male shoehorn!  With this shoehorn, he’d be able to get the factory line going again and, more importantly, his manager would quit yelling at him and making him miserable.

Quick as a wink, he reached behind him through the open door and grabbed a shoehorn hook.  Then he slowly crept up behind Theo and, before you know it, that hook was around poor Theo’s neck and he was in the supervisor’s hands! 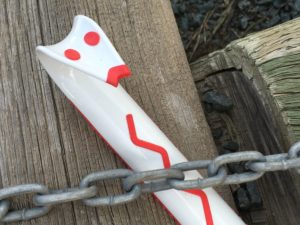 Poor Theo!  Poor Theo’s family!  They looked and looked for him but they never found him.  As for Theo, he found himself living inside the factory, surrounded by lovely female shoehorns that looked as if they were made for him.

You see, poor Theo was gay.  Yes, I’m afraid so. He spent most of his days staring across the wire at the other male shoehorns in the factory, pining after them.  Oh, he did his job.  After all, he had seen firsthand what happened to shoehorns that didn’t perform!  I shudder, SHUDDER I tell you, when I think of it.   No, no, don’t ask.  It’s better that you don’t know!

I could tell you many stories of Theo’s time in the shoehorn factory (and I will, I promise, lewd stories of love requited, sordid affairs and kinky sex, but not just now).  However, first I will tell you how Theo got from the factory to the IKEA store where we found him (after all, that IS what THIS tale is about).

It seems that after some years (and many adventures) Theo grew tired of being confined and came up with a plan to leave the factory.  His hope was to reunite with his family but, unfortunately, being unused to the ways of the world, Theo miscalculated (by a few thousand kilometres).  He managed to sneak into a box of shoehorns that were being shipped out of the factory but he didn’t realise that the factory drugged all the shoehorns so that they wouldn’t cause problems on the trip!  When poor Theo woke up, he found himself standing upright in a box of shoehorns in the IKEA store where he first caught my eye.

And that’s the story of how a shoehorn named Theo became our traveling companion and mascot.  But I still haven’t told you what a Spankeous Assasaurus is, have I?  Well, so I haven’t.  I shall have to explain that next time when I tell you about Theo’s first adventures in the outside world. 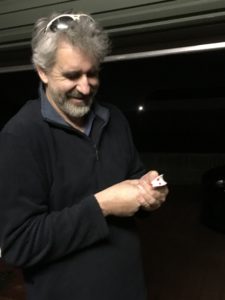 One Comment on “The Adventures Of Theo Thwackious, the Spankeous Assasaurus: How It All Began…”

it is so cute.