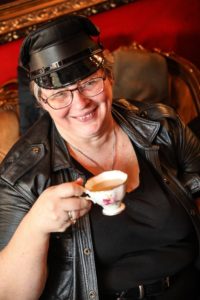 Rena’ is passionate about giving back to the community and that passion has been expressed over the years by creating educational opportunities such as discussion groups, workshops and a personal lifestyle training/mentoring program.  She founded KNOTbound in 2005 as a discussion group and has nurtured it through the years and through various permutations.  In making the decision to turn KNOTbound into a legal and fully functioning non-profit company, Rena’ hopes to reduce the organisation’s dependence on a single influence, instead turning it over to qualified community members to develop and grow.  Rena’ did the majority of the work required to incorporate KNOTbound Ltd and to achieve charity status with the ACNC.

Her lifelong passion for  and involvement in her Leather lifestyle has led her to being selected as a judge for the 2019 Australian Leatherman’s Contest which is held in Sydney every year as part of Sydney Mardi Gras.

Rena’ makes an effort to attend numerous events and can often be found at:

Leif brings to the board a range of experiences.  He served as an officer in the Australian Armed Forces, has been a formal educator in the health care sector then went on to practice as registered nurse and rehabilitation coordinator.  Leif ultimately made a career change away from the health services sector to become an expert in the QA space.  He has gained expertise in WHS, Vocational Rehabilitation, Registered Training Organisations/Education, Validation, Compliance, Independent Quality Audit, Service Organisations and Customised Training and Development programs, Quality Management and Systems Support, Pre-Audit preparation, and Post-Audit support to get all quality aspects of an an organisation up to meet standards.

Leif has been a Director of Kenaz Pty Ltd since 2012 and Board Member of Brain Injury Network of SA since 2010.  His broad experience across many industries but in particular the health industry is a great value to KNOTbound. 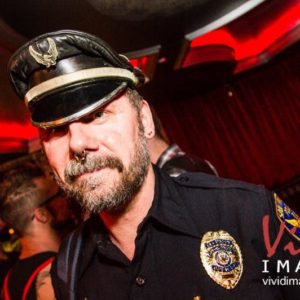 Robert holds the titles of Sydney and Australian Drummer Boy ’91/ ’92 after competing at local, national and international events representing the Australian Leather Community,  competed as an invitational contestant at the Drummer International finals in ‘92 and is the original signatory to the Sydney Leather Pride Week Association constitution as well as their first executive officer, combining the roles of secretary and public officer. Robert has previously been head judge at Mr/Ms Sydney Leather several times and an invitational judge at the Mr Eagle Leather San-Francisco competition 1991, is SLPAss LPoTY 2013, was nominated for the same award the following year and contributed to the not-so-secret committee that judged SLPAss LPotY for many years.  Robert was a member of Girls & Guys of Disgrace (GoD) with Francine (now Jasper) Laybut and Jade Kemety.

In addition to his organisational work, Robert has presented many educational sessions on basic first-aid focussing on dungeon, play space, restraint and impact injuries.   contributes to Sydney Mardi Gras Medical committee and team-leads the service coordinating logistics, first aid, retrieval and stage monitoring at events up to 18,000 participants.

Robert also cares for an old friend/ward living with dementia and acquired brain injury and professionally is a nurse with a wide ranging skill set from clinical care delivery, department management, area program management, aged care assessment and a particular fondness for community delivered services empowering people to more actively control their care delivery needs and wants. Robert has specialised in Neurosciences and wound care in the past and has research skills in the areas of product acquisition. Robert hopes to be able to use his broad skills and specific interests to continue to contribute to the Leather BDSM community and promote secular humanism. Robert is cruising towards retiring from work in six years and lives with the only entity to believe he is God,  his husband/slave/dog of 19 years, leatherdog.  He is planning to continue living life to the fullest.

There are a number of dedicated volunteers that help are helping to build and implement the many projects that KNOTbound manages.  Our volunteers skilled people who perform critical functions for our organisatoin and the community, filling key roles such as:

KNOTbound is truly represented by Australians far and wide.  Many more people are working on local initiatives and pilot programs to help us achieve the goals we have of serving our communities across Australia.  We would like to give special thanks to these people who work selflessly every day for all of us.  Our volunteers are the nuts and bolts of what we do every day.

We have had extremely generous people make monetary donations to KNOTbound Ltd, helping us keep our programs alive and growing.  These people have asked to remain anonymous but deserve the gratitude of the community they are giving to.  Thank you for your generosity of both spirit and pocketbook.